I found something new and exciting recently.  Unfortunately, I don’t think it will help most of you (at least, those of you whose locations I have a vague idea about!), but I want to share anyhow…just in case.

A friend of mine posted a picture on Facebook about a month ago – her dining room table covered in gorgeous fruit and vegetables.  The caption read, “This week’s haul from Bountiful Baskets!”

I had no idea what that was, so I Googled.  Well helloooo, produce co-op!

Bountiful Baskets is a produce co-op run entirely by volunteers.  Participants pay $15 (+$1.50 handling) for pretty much 2 laundry baskets full of produce each week (one full of fruit, the other full of veggies).  They buy local as often as possible and stick to smaller farms when local isn’t an option.  You can also get add ons such as a case of some fruit or veggie offering that week, some amazing organic bread – things like that.

I signed up the first week, not really knowing what to expect.  I was excited, though!  (Yes, you can laugh – I’m a dork, what can I say??)

We went to pick up our first “basket” and I was amazed.  Watermelon, pineapple, apricots, plums, grapes, mushrooms, lettuce, spaghetti squash, potatoes… I can’t remember everything!  And it was all gorgeous!

While we were there, I noticed a few of the people who had purchased bread and eyed up their bags.  The bread looked fantastic.  A mental note was made to get that next time.

Because this is an all-volunteer organization, they ask that if you participate, you also volunteer your time on occasion, if possible.  I decided last weekend was as good a time as any.  Discounted, gorgeous, locally sourced produce is definitely worth a measly hour of my time!

I showed up at the site an hour before pick up as the website instructed.  There was a pretty good turn out – about a dozen people showed up to help.

A few minutes later, the truck showed up – an 18-wheeler.  The driver used a pallet jack to bring our pallets (I think there were four heavily stacked pallets) to the rear of the trailer.  We lined up assembly style and as the pallets were broken down, we yanked the boxes off the truck and sorted them. 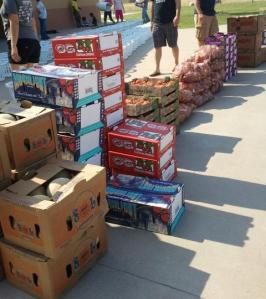 Heads have been cropped off to protect the innocent!

Once everything was sorted, the site coordinators got to business and told us what to do.  We broke off into teams and solos and made sure every basket had the right amount of produce.  Mangos, blueberries, nectarines, cherries, tomatoes, lettuce, potatoes, celery, onions, cantaloupes…again, I know I’m forgetting something!  Just look at all those baskets! 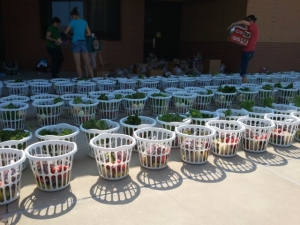 When we were done, each volunteer got to pick an extra item to take home.  Once that was done, we took the remaining produce and spread it out throughout the baskets.  Extras for everyone!

After all the sorting was done, I looked up and saw the line of people waiting for pick up.  Thankfully, our work was done – we signed for our baskets and add ons and headed home.

Once again, our haul made everyone happy.  I can’t tell you how much it makes me smile to hear my kids say, “Can I have fruit for dessert??”  (Granted, Colin’s still not thrilled by most produce, but this has been a great way to get him to try a few new things!)

And the bread? Well the bread is phenomenal.  We bought the Organic 9-Grain bread this last time (5 loaves for $12).  Maybe next time we’ll try the Organic Honey Oat…or the sourdough!

I’ve been telling everyone I can about this organization.  They’re in several states across the US.  My brother and his wife are picking up their first basket this weekend! 🙂

If you happen to not live in an area where they have a site, you can get some friends together and set one up…or get online and see if there’s something similar near you.  Check out their site regardless – they have some great recipes and how-to’s!  www.bountifulbaskets.org

Like Loading...
This entry was posted in Food and tagged Bountiful Baskets, food, fruits, healthy-living, vegetables, veggies. Bookmark the permalink.