For the first two months after we adopted Chloe (our border collie/greyhound mix), she drove me crazy. She didn’t just follow me everywhere, she got in my way every five seconds! She was neurotic and always on edge. You couldn’t get up without her spazzing out about it. She had the energy of a puppy, packed inside a 70lb, 3 year old dog. Calling her a bull in a china closet was putting it lightly.

She was the polar opposite of our other dog, Rodeo. Rodeo (lab/pit mix around the same age as Chloe) is the definition of chill roughly 90% of the day. He sleeps buried in the throw pillows of our couch for hours at a time. The only time he gets riled up is to protect us (usually unnecessarily!) Or to run. He LOVES to run. “Away” is usually his destination of choice! (He comes back, but on his terms.)

Chloe rarely barks and never whines, but she would get so anxious and excited – she seemed tense most of the day, really. She didn’t snuggle. She didn’t want belly rubs. She rarely slept. We were hoping she’d get used to us and settle down. Even once she seemed a bit more settled, she still drove me crazy.

I didn’t understand her. Rodeo could tell me what he wanted in a second, but I was lost with her. My inability to understand her stressed me out even more.

Recently, strong winds knocked down part of our fence. Rick did a patch job until we could fix it properly. Unfortunately, we had more wind come through one night and I didn’t realize that panel had fallen down again until after I’d let the dogs out the following morning. I looked up and they were both gone!

I ran through the house and out the front door – they were only a few houses away. I called out, “Rodeo! Chloe! C’mere!” I said it as sweetly as I could – I’ve read and been told how important tone can be.

Rodeo did his usual – he took one look at me, turned tail and ran in the opposite direction.

Chloe ran right to me. When she got to the driveway where I was standing, she sank down low and crawled to me. I praised her and loved on her and she got all wiggly and waggly. What a good dog! Suddenly, I started to notice her attributes.

Later that day, she was walking around with the Coveted Bone hanging from her mouth. (This bone was Rodeo’s, but she’s since claimed it as her own. They spend hours at a time stalking each other, waiting for the bone to be dropped.) I’d fed the dogs dinner and she wouldn’t eat. She just kept looking at me and pacing. What did she want??

Then it clicked. I took the bone from her and put it on the counter. She wiggled and ran to her bowl to scarf down her dinner. When she was done, she came and sat next to the spot where I’d put her bone. I jokingly said, “What?” She looked up to where her bone was, then back at me. I handed her bone to her and she was wiggling again. We’d connected. I was starting to understand her.

After that, she started snuggling me on the couch. She’s also been demanding belly scratches! Rick says she still doesn’t really like him scratching her belly. With me, she’ll either stand over my arm and paw at me or she’ll lay on her back until I get the idea. If I stop before she wants me to, she pushes my hand back under her for more.

This dog used to stress me out so much, we seriously considered giving her back. Now I can’t imagine not having her around. She’s so loving – we just had to earn that love. She didn’t give it up as easily as some dogs do. She’s incredibly smart and – now that we’re learning to understand each – she listens and does what she’s told. Even when she’s in full on play with Rodeo in the yard, she comes when called.

Of course, she still drives me crazy on occasion, but she makes up for it by being an all around wonderful pup. I love our Chloe. 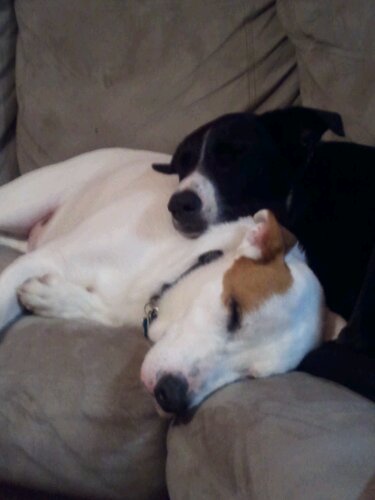 They love each other!

Like Loading...
This entry was posted in Our Dogs and tagged affection, Border collie, Dogs, greyhound, pet behavior, Pets. Bookmark the permalink.